“Farewell, my friends and colleagues. I sincerely hope our paths cross in the future” – I have been seeing quite a few emails being signed off in this manner recently. People taking a break, reorganizing, trying out other roles, jumping ship, retiring, moving up the ladder, and a load of other reasons. It is a fine sentiment, and a gloriously positive metaphor. Like we are all traversing an imaginary path – sometimes sauntering, sometimes sprinting – and on occasion, we see an intersection, where our paths cross with other paths, and look! There’s a colleague I used to work with five years ago – she used to walk the same path as me that time, and then decided to reroute, and here she is again! How delightful! This network between people, this illusory line connecting the dots that are us (made famous by applications like LinkedIn and Facebook to propagate virtual connectivity), is truly fascinating. We don’t give it much thought because we are too busy scrambling over rocks in our paths on all fours or assuming that our path is the most important path of all and needs our unwavering attention at all times. But the way we are connected to the various people in our lives is actually quite fascinating.

The “six degrees of separation” idea highlights that all people are a maximum of six social connections away from each other. There is also a very entertaining game developed by American actor Kevin Bacon called The Oracle of Bacon, where you can see the connections between any two celebrities by just entering their names into the page. For example, I typed in Jay Z and Rajinikanth, and found that their degree of separation is just 4. Who woulda thunk! The interactive application shows how exactly they are connected, with links to each connection. 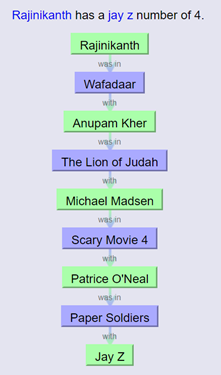 We might not think we really know someone, but the concept that anyone you can think of is a ‘friend of a friend of a friend’ actually rings quite true in the universe of human connections. There are invisible intersections everywhere, and the offhand sentiment of paths crossing is also one that is most certainly possible taking into consideration the laws of connectivity and the degrees of separation. Your boss from yesteryear might pop up in the yoga class you teach part time a decade later. You may find out that your child’s pediatrician is actually your ex-boyfriend’s current wife. Or the soap opera star that makes you turn puce is actually your therapist’s cousin. Or to make it more interesting, maybe you worked in the same office building as Tom Hanks’s nephew who was on the sets of The Circle, which means you are connected to Emma Watson!

We are social, after all. And even the most introverted amongst us actually has more connections than they know of just by association with even a handful of human beings, and that is fascinating (did I mention that before?). Now, I don’t know about you readers, but I do sincerely hope all our paths cross in the future (which by now you know, they will).